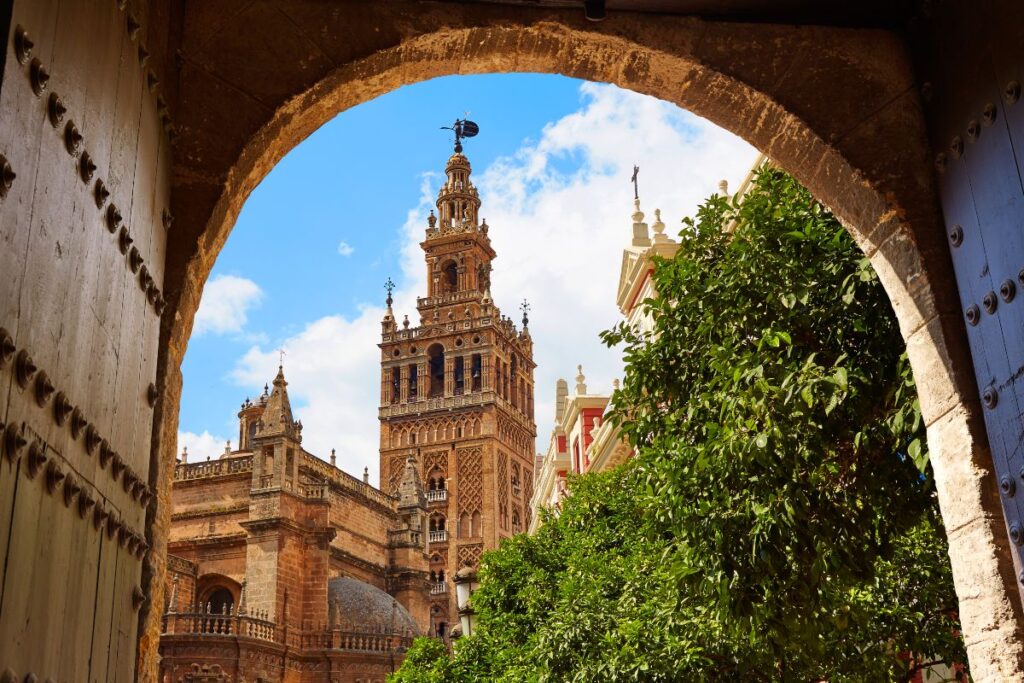 Entrance tickets to the monuments are not included in the price of the visit.

-Other types of discount:

Born or resident in the Diocese of Seville Free

-Per senior € 7 (Only seniors from European Union)

-Per student € 7 (14 to 30 years old, student document is necessary, only students from European Union)

-Other types of discount:

Born or resident in Seville Free

Book as soon as possible to guarantee availability, especially on High Season (Spring and Fall)

Reservations are allowed up to 24 hours before the service (local time) as long as there are tickets available to access the visit of the monuments.

Yes (It is suitable for people with reduced mobility).

The meeting point is the Puerta del León.

The Puerta del León is located in the Plaza del Triunfo, the center of the World Heritage area of ​​Seville. You will see many visitors and groups walking and taking photos of every corner of this spectacular enclave, where we find the 3 buildings protected by UNESCO in Seville, the Reales Alcázares, the Cathedral and the Archivo de Indias.

During our route we will discover that the Alcázar is the oldest Royal Palace in Europe still in use. In its more than 1000 years it has offered accommodation to all kinds of rulers, nobles, monarchs … Today we find 3 palaces and more than 7 hectares of gardens designed for the enjoyment of the 5 senses.

Once we finish the visit in the Alcázar, we go to the Puerta del Lagarto, in the Cathedral.

We will discover which is the largest Gothic temple in existance!!

Price of the guided tour:

The Reales Alcázares preserve 3 palaces and more than 7 hectares of gardens.

The enclosure is completely walled by sections of wall built at different times.

Home to different monarchs, nobles, governors and politicians, today the Reales Alcázares is considered the oldest Royal House in Europe still in use, with its more than 1000 years of age it is still the Royal Headquarters in Seville of the Spanish Monarchy.

The word Alcazar comes from the Arabic -al-Qaṣr- which means fortified castle or palace. In turn, -al-Qaṣr- is a deformation of the Latin word castrum or castra.

When Muslims settled in the Iberian Peninsula from the 8th century AD, they begin to build constructions for the defense and control of their new territories, one of them was the Alcazar.

To manage this new emirate of Al-Andalus, they needed various representatives of the Emir to govern the different regions. These rulers and of course the Emir had to live in buildings according to their category, so many of them chose these walled areas as their residences and royal seats.

The governor of Seville could probably choose to build a fortified area on the South of the city, the Alcazar, in the 10th century AD. Little by little, the new muslim dinasties were coming and all of them decided to modify, renovate or redecorate what preexisted before in the enclosure.

As a result of the constant adaptation of the spaces today we enjoy in the same enclosure, Gothic style, Mudejar decoration, Renaissance structures…

As for the Cathedral, it is one of the main attractions of the city, being in fact the most visited monument in Seville.

Millions of visitors a year admire what is the largest Gothic temple in existence and one of the largest Christian temples in the world.

This building began to be built at the beginning of the 15th century, on the site left by the demolition of a great temple, the great Aljama Mosque or Greater Mosque of Seville, built by the Muslims in the 12th century.

On the other hand, the heritage that the Cathedral of Seville treasures is infinite in value, possessing pieces by the greatest and best artists in history. This means that today the Cathedral has a collection that any institution, museum or gallery in the world would like to enjoy.