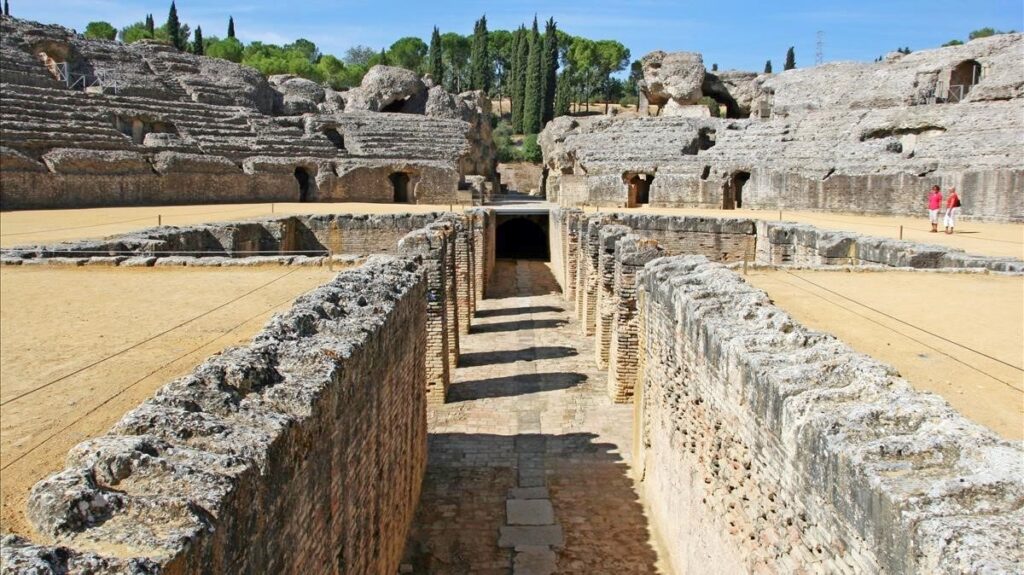 Guide in Spanish and English.

Entrance ticket to Italica for citizens who are not from the European Union: € 1.50.

Book as soon as possible to guarantee availability, especially on High Season (Spring and Autumn).

If you still have more questions, you can consult our frequently asked questions section. If you have any booking problems or need a different service, contact us.

No (not suitable for people with reduced mobility).

2-hour visit to the ruins of Italica, unique in the world for various reasons that we will discover on the tour.

These ruins are located about 20 minutes from the historic center of Sevilla, in Santiponce and right next to the Monastery of San Isidoro del Campo.

Italica, land of emperors, Trajano, the first emperor with Iberian blood, was born and raised in Italica.

He is considered one of the most important emperors in the History of the Roman Empire.

He designates his nephew, Hadrian, as his heir, being named Emperor when his uncle dies.

Adriano was not born in Italica, but he is the second Emperor in history with provincial roots, like his uncle. His father was from Italica and his mother from Cadiz, although he was born in Rome. At the age of 15 he was sent from Rome to train as a soldier in Italica, that wonderful memory on the land of his ancestors will mark him for the rest of his life.

When Hadrian begins his period as Emperor, he decides to base his mandate on 2 great plans. To exercise full control over the military balance of the entire Roman territory, investing in the stability of the Empire, and secondly, to glorify Trajan’s uncle as a divine figure.